Why did Shahrukh and Salman hug? 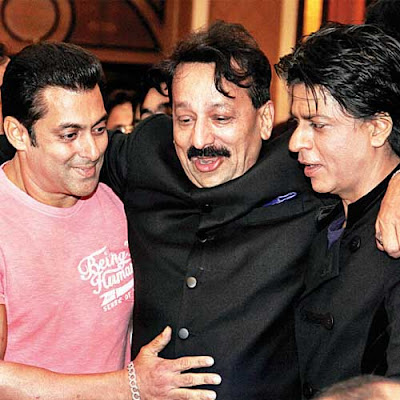 Film world is cheering for end of Shahrukh Khan and Salman Khan's fight. What can be good news other than this in Ramadan (correct spelling is Ramzan) month which is considered as most sacred month for muslim brothers?

It is known fact that both had fight on occassion of Katrina Kaif's birthday party which was held at Salman Khan's residence. At that time, Katrina Kaif was Salman's girlfriend. Fight was sparked from jokes which went to be personal. Shahrukh Khan joked about Salman Khan's ex girlfriend Aishwarya Rai which Salman Khan couldn't tolerate. After then, they didn't speak to each other.
They both have camps. So both started to draw persons from opposite camps. Salman Khan bonded with Akshay Kumar and Ajay Devgan against Shahrukh Khan. Shahrukh Khan brought Rohit Shetty (who is considered to be friend of Ajay Devgan) for 'Chennai Express'. Shahrukh also brought Katrina Kaif for his 'Jab Tak Hai Jaan' and performed kiss and other intimate scenes with her to envy Salman Khan.

Sharukh's film 'Jab Tak Hai Jaan' in which Katrina Kaif was lead heroine, was to be released with Ajay Devgan's 'Son Of Sardar'. Ajay Devgan complained to competition commission that Yashraj Films was pressuring on distributers to show only its film 'Jab Tak Hai Jaan'. So Ajay Devgan roped Salman Khan for cameo.Salman Khan happily did it. Not even that, in promo, his dialogue was symbolically challenging Shahrukh Khan. It was like this : Pathan ke yaar se kabhi panga mat lena.

Well, this is now past matter. Both have hugged each other. It is said that compromise is not sudden. It was planned. Both were willing to have friendship from long time. In March, 2013, it was rumour that Shahrukh Khan went to Salman's residence. SRK's car was spotted in front of Salman's residence at 8.30 pm 31st March, 2013 night.

It means Shahrukh Khan was willing to be friend with Salman again. And he took initiative. Why did Shahrukh Khan do this? He is said to be very arrogant. He has insulted many persons, although by his cheap humour. So he can not be believed to take initiative, but he did. why? Let's check.

Shahrukh was left alone after fight with Salman Khan. Farah Khan left him and signed Akshay Kumar in her film as director. Karan Johar did not part away with Shahrukh but made no film after rift with Salman. Arjun Rampal also went away from Shahrukh Khan due to his arrogant nature. It is known fact that those who got Salman angry are left alone, Salman camp is so powerful. e.g. Vivek Oberoi. After rift with Salman Khan (famous 42 calls press conference) Vivek stopped getting A grade banner films. He apolosied publicly to Salman Khan, but Salman did not forgive it. Shahrukh also had to face similar siquences. On one side, Shahrukh's films were getting flop. Specially his Ra.one became material for joke. Shahrukh who is infamous for joking on other persons, could not tolerate joke upon himself for Ra.one and slapped Shirish Kunder. Sharukh also indulged in fight with security guard at Vankhede stadium. These all incidence made Shahrukh Khan realise that he need to compromise with Salman Khan.

But the question is why Salman Khan forgave Shahrukh while he is not known for forgiving persons easily. Infact Salman Khan also did not forgive Shahrukh easily. As said above, Shahrukh initiated peace process (!) in March,2013 and he succeded in July, 2013. Salman Khan knew that Shahrukh Khan had good political relations with central leadership of congress. This year, congress and MNS favoured to lift ban on Shahrukh from entering Vankhede Stadium. Salman was getting in trouble in Hit and Run case. May be he needed Shahrukh Khan to influence in the case.

But it was Baba Siddiqui, congress MLA in Maharashtra, who made Shahrukh and Salman Khan hug each other in his iftaar party. Let's see this is jenuine compromise or just for sake of mutual need.