It is resurging from 'Raakh'! 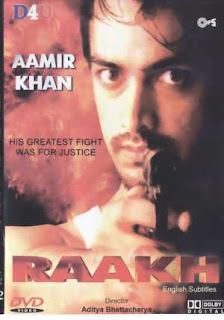 Do you remember a film named 'Raakh'?
Do you remember star called Aamir Khan acted in it?
You might say, Ah! When was such a film released?
But those who used to keep track of bollywood films might remember this -came and passed-film 'Raakh'.
The big news is that it is going to be rereleased after 20 years!

Raakh was came out in 1989 to critical acclaim and was widely covered by the film critics in the media. It was a project of great importance for many of the cast and crew members who made their debut with this movie. When we contacted Sangeeth Sivan, the Executive Producer of the film, he said, "The entire film is shot like it's a home video. It does star Aamir in the lead, though it is a bit dark."

The movie acted as a crucial platform for many debutants like Aamir Khan, Santosh Sivan (Cinematographer), Sreekar Prasad (Editor), , Aditya Bhattacharya (Director) & Asif Noor (Producer) all of who were under 30 years of age at the time. The commendable fact is that Aditya Bhattacharya, who just 23 then, became the youngest director of Bollywood at that time winning the Best Directorial debut award from the Bengal Film Journalists' Association.

Raakh deals with an Indian Metropolis that is decaying, lawless and tragically corrupt. A typical party ends in untypical violence. Aamir is awkwardly sensitive and inarticulate. Supriya Pathak, the poised distant girl whom Aamir loves with mad desperation, is gang raped. She is a survivor. Disillusioned and practical, she rules out revenge. Supriya has now grown beyond Aamir. Aamir, driven by impotent rage, hesitantly approaches the law. Only to learn that the rapists are the ruling mafia clan whom neither he nor the police can touch while he is violently uprooted from his safe, if lonely, upper class home. Thus begins the chaotic journey that takes him into the precarious outer world. Here, his only friend, a street urchin offers him mute sympathy until Pankaj Kapur- an embittered cop - cynical witness to the first outrage is goaded by his anesthetized conscience to search out Aamir. An adolescent seeking manhood and the older man seeking his lost innocence come together...

The rights for the film Raakh which were originally with the director, Aditya Bhattacharya, have been purchased by Audacity International and Storm. Initially though, Sangeeth Sivan and Asif Noor, the producers of the film, had planned on launching the film on a collectors DVD. However, after purchasing the rights for the same, Audacity International has reworked on the original reels and has digitally re-mastered it. Raakh is all set to re-release on the 12th of June.
No hassels! These days are dry days anyway as dispute between multiplex owners and producers is not solved yet.
Posted by Jaywant Pandya at 12:42 AM 2 comments: