Savitabhabhi's exclusive and real one interview on tv! 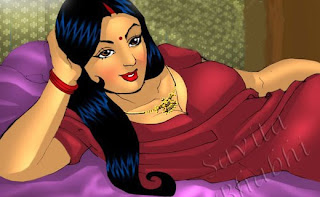 Have you seen Savitabhabhi in person?
You will say this comic character and its site is prohibited in Bharat (not in India). But you can see her exclusive and firstever interview on internet tv. Not only interview, she is giving solution to global issues too. 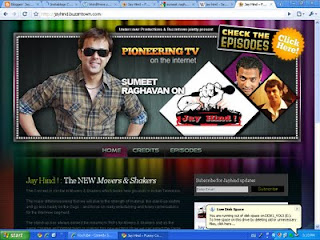 You will probably say, I must be joking.
But no, it's half true. This interview is not real one, but it's spoof. The show name is 'Jay Hind' first ever  Internet IndianTv show.' Show was launched on 15th August, 2009- Bharat's independence day.
Better known as Sahil of 'Sarabhai vs. Sarabhai' Sumit Raghwan has become first ever anchor of internet indian tv .
The show format is similar to 'Movers And Shakers' that came during late 90s. It was anchored by Shekhar Suman. This internet tv show 'Jay Hind' is written by Rajeev Nigam who also wrote for 'Movers And Shakers' and currently doing stand up comedy as Birbal with Rajesh Kumar in 'Dekh India Dekh'. Rajeev will be seen as common man in the said show.
Abhigyan Jha is the man behind 'Jay hind' show. The show can be watched at http://jayhind.buzzintown.com./ or http://jayhind.tv/.
Posted by Jaywant Pandya at 3:20 PM