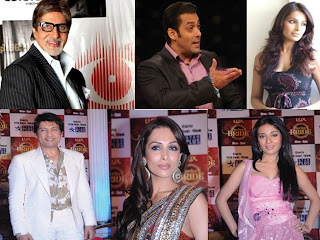 Tv audience will witeness Kaante ki takkar between biggies! It is now well known fact that Amitabh Bachchan is  returning on television in next month (i.e. october 2009). We will see the middle generation of indian film industry (as of now, as it can not be called gen-x.) on Sony Entertainment Television as it is launching Dance Premier League (DPL). Salman Khan (who is already hosting 'Dus Ka Dum'), Preity Zinta , Bipasha Basu, Arshad Warsi will have a significant role in it. While choreograph turned director Farah Khan is already busy with her chat show 'Tere Mere Bich Mein'. Star Plus has announced a reality show - 'perfect bride'. Shekhar Suman who is called Amitabh of Indian Television is having major role in it. (He has already turned back to acting and doing good with 'Tedhi Baat'). To add glamour quotient, Amrita Rao and Malaika Arora Khan will also be there.

So, wait and watch for these biggies setting small screen on fire!

P.S. : News got just recently says, Madhuri Dixit Nene has confirmed to participation for Dance Premier League. Aishwarya Rai is yet to confirm.Really it is going to be very big show.
Posted by Jaywant Pandya at 8:15 PM