Planned rivalry of Amir-Shahrukh and Salman? 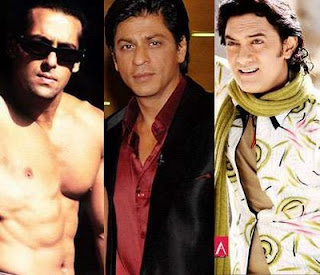 Recently Salman attacked on Shahrukh once again. He was praising Amir’s body and film. Even at promotion of his own film ‘Yuvraj’ he promoted his new friend Amir Khan’s ‘Ghajini’.

Now look at this. A couple of days before release of ‘Ghajini’, Amir mocked at Shahrukh’s claim of No. 1 superstar. He said, ‘Superstar doesn’t claim himself. Audience make superstars. In my view, Amitabhjee is still superstar.’ Amir also dared Shahrukh to act with him.

This rivalry is not new. Before this Amir wrote at his blog, ‘Shahrukh is licking my feet.’ Then he clarified, ‘Shahrukh is my dog.’

Salman and Shahrukh were great friend untill Salman’s current girlfriend Katrina Kaif’s birthday party. At this party, Shahrukh blow below the belt and reffered to Salman’s relations with his ex-girlfriend and wife of Abhishek Bachchan, Aishwarya Rai Bachchan. This did not suit to Salman and He went ahead to physical fight with Shahrukh. At this juncture Amir interrupted and physical fight did not happen.

The time of this quarrel is important as at the same time Amitabh Bachchan, Abhishek Bachchan, Aishwarya and Jaya were starting their world tour. So insiders of Bollywood believe that Salman-Shahrukh-Amir rivalry is well planned and it is intended to draw attractions towards themselves and thus Amit-Abhi and Aish will not get publicity.

If it is true then it is sad as three ‘khan’ superstars have to do such a low category gimmics to highlight themselves. Instead they should let speak their work.
Posted by Jaywant Pandya at 2:38 PM