For Kangna yog and silence is the remedy 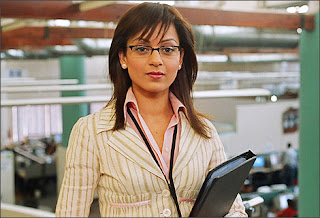 Kangna Ranaut is not unknown name for cine lovers. In her words, she has suffered a lot during last few years.

She had admitted that she was going through bad times. She had said, "I got everything very soon in my life but personally my life was going through too much of trauma. I was really trapped by dirty people and they wouldn't let me concentrate on my work. They tried to harm me both physically as well as mentally."

However, everything seems to be passe now ever since she moved on to 'yoga'. The biggest gift she's received from this, she says, is the practice of Silence or "Maun". The practice of staying silent physically brings to the fore the tremendous busy-ness of the mind and help to bring some quiet there as well.

Effervescent and vivacious by nature, Kangna has found a 'thehrav' in her life ever since she adopted 'maun'. "Initially I found it very difficult to stay silent; however through perseverance I did manage to develop this as a regular part of my yoga practice and have benefited ever since."

"When I am working, I have to give it 100%. So that's why I took a break for my personal work to sort out all my issues and only then got back to work. I did not want to struggle between work and personal issues. I am not that kind of a person. I can do only one thing at a time", she had stated earlier.

"Now, through Silence, I feel I've discovered my Soul, the very centre of my being, which is the source of all my energy - creative, spiritual, emotional and mental. I've always been a very focused person, and I've chosen to portray characters in my film that are challenging and strong. This awareness and practice has given me greater ability to channel my energy effectively to deliver even better on these performances", she says in an obvious relaxed tone.

Through shooting Raaz-The Mystery Continues, Kangna has been even more diligent about this practice. That's because the character is one who gets possessed and has to deal with the horrific consequences. "The role required a lot from me. It's a very intense role. So it was imperative to keep my practice alive during the outdoor schedules to be able to maintain the focus and equanimity needed to deliver the required performance."
Posted by Jaywant Pandya at 1:58 PM