Neetu Kapoor is coming back, atlast! 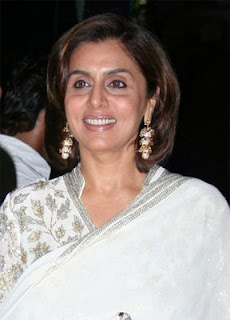 We can hum this famous song of ‘Ek main aur ek too’ from movie ‘Khel Khel main’ as Neetu Kapoor is coming back. Oh, come on! Don’t tell me that you don’t know Neetu Kapoor. And still you havenot gotten hint, let me clarify Neetu Kapoor is none other than Neetu Singh, known before her marriage with Rishi Kapoor.

Actually, there was no reason for Neetu not coming back.

First of all, in the age of multiplex theatres, many films are being made whose stories go around aged people. Second, Neetu has kept herself fit very much and beauty is ishwar’s grace to her. Third, her daughter Riddhima has married since one or two year. Fourth, the unwritten law of Kapoor Khandaan bahu or beti will not work in film has been broken with Karishma entering in hindi film industry.

So, which is the lucky producer or director and actor Neetu will work?

It is Saif Ali Khan. Don’t assume him as hero. No. He is the producer. Yes, he has turned producer. Infact film has Saif as hero, but Rishi Kapoor will be also working in it. The lead heroine is Deepika Padukone.

In her youthful days, Neetu and Rishi’s chemistry was unbeatable and very natural. But Neetu had also made pair with Jeetendra (Jaani Dushman, The burning train etc…), Amitabh Bachchan (Yaarana, The great gambler, Parvarish, Adalat).
So, wait for this gracious and gorgeous lady’s come back film!
Posted by Jaywant Pandya at 8:11 PM

Email ThisBlogThis!Share to TwitterShare to FacebookShare to Pinterest
Labels: come back, Neetu Singh