Do you know this girl? 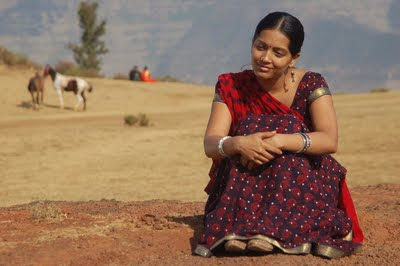 You didn't recognize this girl, right? Well, this is not your fault because you have most of times seen this girl in skimpy cloths. She is Meghna Naidu. Yes, the girl which exposed highly in 'Hawas' and 'Thoda resham lagta hai'  song's video.


Director Ashok Nanda decided to cast Meghna Naidu for the role of an ugly girl in Rivaaz, path-breaking film that exposes the traidition of family prositution in Indian villages that exists even today. Megha Naidu, shocked by the actual bytes and footages, immediately expressed her consent to act in the film yo jelp the cause.
But on the first day of shoot, when Meghna walked in for the shot, Ashok Nanda asked her to go and wash off her make-up. "But I haven't worn any," said Meghna. "You ahd told me to come without make-up."  Shrugs the director, "she just would not look ugly without make-up. I had to get make-up done to make her look ugly."
Now that is one compliment Meghna Naidu would always remember.
Posted by Jaywant Pandya at 2:11 PM