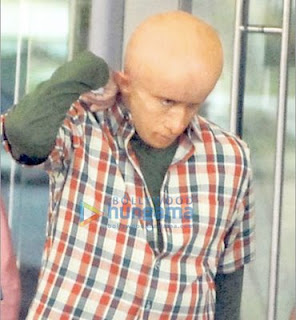 Changing hairstyle has been trend since Amir’s new hairstyle in ‘Dil Chahta Hai’. From Amir to Shahrukh and Abhishek to Ajay Devgan, every actor is trying with new hairdo. But one man who rarely changed his hairstyle was Amitabh Bachchan! Yes was! Because he will be seen with new hairdo in his new film ‘Pa’.
Don’t believe?
Look yourself in pic. Yes, it is no one but Amitabh Bachchan. It is not first time Amitabh has gone bald! Before this, he was seen bald in ‘Coolie’. Don’t remember? Try to recall that famous song ‘Lambujee Lambujee’.
Pa is being directed by the ad whiz R. Balakrishnan (popularly known as 'Balki') and who had earlier directed the Big B-Tabu starrer Cheeni Kum. Even though every minute detail of this film is being kept under strict wraps, rumors have it that the film is about a child who ages much faster than any normal child would do. If you thought that the adjoining picture of Big B took the daylights out of you, then, let us tell you that the real surprise of the film lies in the fact that Amitabh Bachchan plays Abhishek Bachchan and Vidya Balan's son in the film.
Posted by Jaywant Pandya at 5:15 PM