Katrina kaif has done what Archana Puran Singh did! 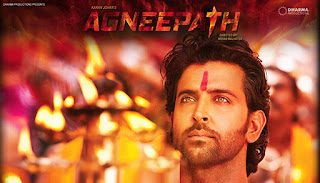 Atlast, 'Agneepath' film is released. As per filmmaker, it has broken record of Salman Khan's 'Bodyguard' for collection on opening days. It is very hard to remember such record so no one can verify it. Second thing, it may due to curiosity that in comparision with Amitabh's 'Agneepath', how is Hrithik Roshan's 'Agneepath'. It has to be remembered that for playing Kancha China, Danny Dengzoppa did no antics such as Sanjay Dutt.
Actually, if you compare both 'Agneepath', you will be able to see what changes have come in these 22 years. Hrithik Roshan is playing role which Amitabh played. No problem. In original film it was Madhavi who played lead heroine against Amitabh. Now it is Priyanka Chopra. And Katrina has done item song which was done by Archana Puran Singh in original film.

We should also remember Mukul S. Anand. A marvellous director who gave triple wonderful films with Amitabh, Danny and Music director Laxmikant Pyarelal and dialogue writer Kadar Khan. In original film, there were beautiful dialogues such as, 'Pagar badhao, itne main ghar nahi chalta to saala iman kaise chalega?', 'Hawa tez hai Dinkar Rao...Topi sambhalo naheen to udd jayega...'
And it has also be recall that though 'Agneepath' and 'Dayavan' were based on 'God father' and 'Nayagan' (beautiful film from south in which Kamal Haasan played lead role), it was also based on 'Deewar'. In 'Deewar' it was same actor who played lead role...Amitabh Bachchan. Mother with principles role was played by Nirupa Roy in 'Deewar' and Rohini Hattangadi in 'Agneepath'. Where as 'Deewar' established Amitabh as angry young man, 'Agneepath' let him won his first national award.
and there are more and more such memories flashing in minds. 'Agneepath' was dubbed in Amitabh's false voice and as it didn't work, it was redubbed in Amitabh's regular voice. Mithun Chakraborty played his role superbly. Gujarati actor Arvind Rathod played one of four Gundas who groomed Vijay Dinanath Chauhan as don. While 'Deewar' was based on don Haji Mastan, 'Agneepath', 'Dayavan' and 'Nayagan' were based on south don Varadrajan Mudaliar. When 'Agneepath' released, time was seen as Amitabh's end, but with this film Amitabh not only got national award, but also established that he was not finished. And you can see, he is still running ahead of his son, Shahrukhs, Amirs, Salmans, Hrithiks...