I don't know whether it was mere coincidence or what!

Recently while surfing I came on DD. I stopped there for some moments as one serial was being telecasted. Cast included Varun Badola and Shweta Kawatra (Pallavi of Kahani Ghar Ghar ki). I found same dialogue-same situation, same story that I watched one or two days back. 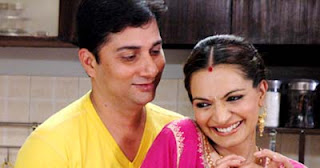 'Yes, it is the same,' I told myself. Now I remembered perfectly. Same story was going on in 'Sonu Sweety' that is being telecasted on Sab Tv. As I kept continue watching the serial, it was confirmed that this is the same serial that was being air on Sab Tv too. Here, on DD serial's name was 'Sohni Mahiwal', while on Sab it is 'Sonu Sweety'. Hero - Varun Badola is same, heroine Shweta Kawatra is same. However some actors were different in 'Sonu Sweety', e.g. Shweta's brother in the 'Sonu Sweety' was different. Set of house was also different. Serial is quite hilarious. It is 'nock-jhonk' between husband and wife. There is no double meaning dialogues which have become common in comedy serials. No chhichorapan. It is quite like serials that came during DD era.

So, the serial which was not clicked on DD that aired in 2006- three years back, became super hit on Sab Tv. So hit that now it has been telecasted twice in week!
(To read it in Gujarati click : http://jaywantpandya.wordpress.com/2009/10/29/સોનુ-સ્વીટી-સોહની-મહિવાલ/)
Posted by Jaywant Pandya at 10:33 PM