Be it Rakhi or Rekha, successful marraige is doubtful! 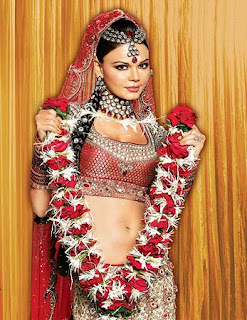 Countdown has begun. Saturday is d-day. Many anxious viewers will witness Rakhi’s swayamwar coming to an end with marriage to Elesh Parujanwala. For fulfilling Rakhi’s demand that she will not abandon her work for sake of marriage, Elesh has agreed to settle down in Bharat.
But there is big question about success of marriage. However, there was question for marriage itself taking place. Two contestant who were eleminated from show, disclosed that there will be no marriage. It is just drama. When it will come to end, final contestant will be asked for choice between Rakhi and money and he will prefer for money.
As for now, it doesn’t seem that as per these abovesaid contestant’s claim, marriage will not take place. It will happen and with big hype. Bandbaje ke saath dhoomdham se shaadi hogi. Badi Nautankee hogi. Claims one source.
If you have seen film ‘Salaam-e-ishq’ then you can say, everything in Rakhi’s case is happening as per film. In the said film, Priyanka is an item girl. She does everything as per decided. One unknown person Salman suddenly claims to be her childhood boyfriend, then he proposes her. Tenu le ke main javanga. Tinu Anand, secretary of Priyanka explains her that she will get lots of publicity by this stunt and she agrees to him.
Now the question is what after marriage? Can she be just an ordinary housewife? No. She has straightly said no. She will not put an end to her career. And we have seen her behaviour with her boyfriend Abhishek Awasthi. No self respecting husband can live like Abhishek with Rakhi. Rakhi is overambitious.
We have also seen unsuccessful marriage of Rakhee Gulzar and Rekha. So, after some months, if we heard news of divorce of Rakhi, we shouldn’t get surprised.
Posted by Jaywant Pandya at 12:16 PM